At the forefront of the fiddling community in the Greater Portland area, one finds the musical duo of Don and Cindy Roy who have long entertained audiences in the Southern Maine area and beyond. Add bassist Jay Young and you have the Don Roy Ensemble.

Don is a champion fiddler with depth in many styles of fiddling. Hailing from roots deep in the Maritimes and Quebec, the Roy’s musical passion lies with the French Canadian tradition followed closely by Celtic music.

Don has been a member of many successful groups including bluegrass, Irish, and French and directed the popular Maine French Fiddlers for its duration. Don has received Fellowship awards from the state of Maine in 1994 and 2001 for excellence in traditional music. Don’s CD Thanks for the Lift earned a nomination for the National Heritage Award.

Cindy, also a member of the former Maine French Fiddlers, is well known for her step dancing piano accompaniment which is among the best in New England. Augmented by her rhythmic feet, she adds life and enthusiasm to the music. Some of Don and Cindy’s families were getting together for house parties long before Don and Cindy met on a blind date to play music in 1980. The heritage continues and Cindy and Don will entertain you with a blend of fiddle and piano styles that are common to traditional musicians of Maine.

Jay Young plays upright bass with the Don Roy Ensemble. Jay began his musical evolution playing folk music on a 12 string guitar in the 1960’s. He slid into playing electric guitar in a blues band influenced by the Chicago blues style and then in a series of rock ‘n roll bands. He started playing electric bass in a country band in the 1970’s. Jay claims his country band played in clubs that should have had chicken wire in front of the stage.

With Don and Cindy, Jay’s bass playing ranges from a minimal definition of the chord progression to a jazzy walking bass style. He’s been accompanying Don and Cindy Roy for many years in a variety of bands including The Maine French Fiddlers and at times it is hard to distinguish Jay’s bass playing from Cindy’s left hand rhythms on the piano. Jay claims he has a psychic connection and knows what Cindy is going to play before she plays it.

How about a private concert at your home for you, your family and friends?

Getting married?  How about some traditional fiddling for background music or the ceremony? Ever consider a contra dance?  Check out Bill Olson calling for this family. We have done many dances for weddings.

Studying music in school?  We can bring our music and violin making to you and your students. 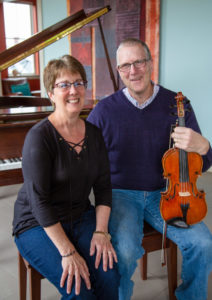